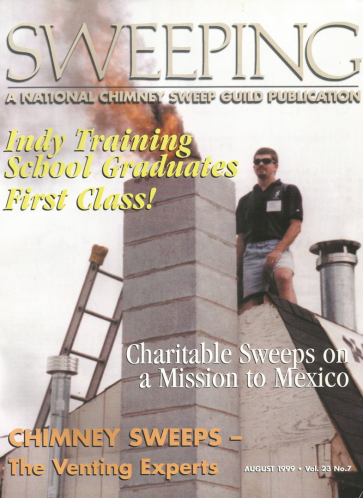 After only 2 years in the business it was an honor to be featured on the cover of the industry's leading trade publication.  I was receiving my CSIA Certification after completing a week long training in Indianapolis, IN.  This class was the first of its kind at the Chimney Safety Istitute of America. We were studying the characteristics and affects of chimney fires when I was captured in this photo. 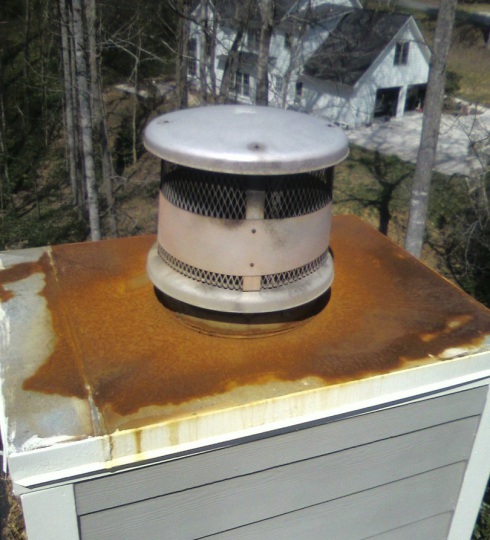 This is a typical builder grade galvanized chase pan.  This pan is small enough that it could have easily been made out of one sheet of metal instead of seamed as this one. This one also does not have a proper turn down which should cover the vertical trim boards on the corners of the chase.   At least this pan has a drip edge on the turn down which prevents surface tension from causing water to creep up underneath the cover. 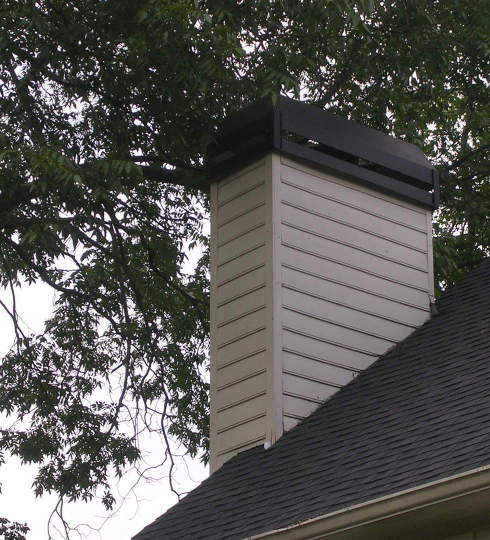 This is a chase pan & shroud that is manufactured with a metal that has a black coating that protects it from rusting or weathering. These covers were installed on Mikandy Road in Kennesaw on 5/9/2005. See below for a more recent photo. 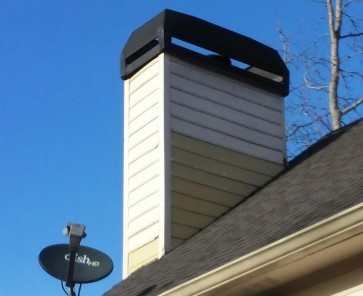 These are the same covers seen in the picture above. Although one of the trees is missing and some of the siding has been replaced the covers show very little change. If they had been the standard painted covers instead of the coated you would see that the paint would have faded, chipped and pealed. 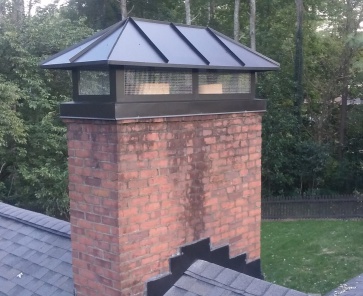 These caps function to not only prevent birds and animals from coming down the chimney but also to keep water from coming through a cracked crown and erroding the masonry below.  The black stains on the side are evidence that this was happening.  Now it will stop.  These caps are typicall made from coated metal like the Pans and Shrouds above. They can also be made out of a studier black aluminum for additional cost.  They are fastened with screws for easy future removal.

Below is a video from THIS OLD HOUSE demonstrating the proper installation of a wood-burning fireplace insert.  The vast majority of inserts I have run into have not been installed in this way and as a result often have persformance problems but at the very least create potential fire hazards.  In the industry we call these improper installations "creosote factorys" as they are not able to allow the smoke to evacuate the house properly and therefore it rapidly accumulates in the form of a tar or glaze inside the fireplace behind the stove as well as in the chimney.  I do not install these inserts but if you are planning to purchase one, please make sure you have it installed correctly for your safety.

WHY SWEEP IN THE SPRING?

Don't be discouraged if the first paragraph or so contain technical trivia. It will quickly transform into the practical, with tips and reasons to take action. Hopefully you will be entertained along the way.

“Creosotes are a category of carbonaceous chemicals formed by the distillation of various tars and by pyrolysis of plant-derived material, such as wood or fossil fuel.”1  The more common kind of fossil fuel type creosote is Coal-tar creosote which is regularly used as a preservative in wood such as power poles and railroad ties. Wood-tar creosote is commonly known for its ability to preserve and flavor meat such as smoked samon or beef jerky. One of its lesser known uses is for it's medicinal properities. Guaiacol is a phenol which makes up 25% of the creosote in the wood from Beech trees.2 A synthetic modification of this phenol is used to manufacture such medications a Mucinex and Robitussin.

Creosote in your chimney occurs as the byproducts of incomplete combustion (smoke) cool off and condensate on the walls of the chimney. This is liquid fuel. As the chimney heats up with the fire and these warm flue gases, this liquid fuel will dry and form a layer of solid fuel commonly called Soot.

This fuel can ignite whenever exposed to heat. The amount of creosote inside a chimney when it ignites is one of the main factors that determins whether the chimney fire will do damage (heavy accumulation), be noticed without doing damage (moderate accumulation) or whether it will even be noticed as having occured (lite accumulation).

The exact recipe of conditions for this ignition to occur is not something easily described or controlled. Therefore, the method used to ensure safer fireplace operation is to have the creosote removed regularly to keep it from accumulating to dangerous levels. This is why you call a chimney sweep.*

5 Reasons to Sweep in the Spring